A Brief History of Downtown Tucson

Leave us a little info, and we’ll be in touch.

It’s impossible to walk through downtown Tucson without stumbling upon a piece of history. Every building you see has a story of its own, and all of these stories merge into one great narrative—the story of this restless, ever-changing metropolis. Most Tucsonans, however, may not realize just how deep the roots of their city go. Here is a short look at the long history of our city’s downtown community. 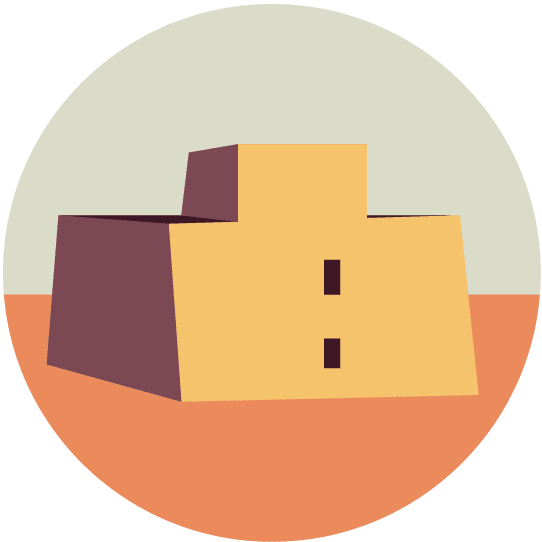 Tucson has been continually occupied for longer than almost any other city in the U.S. The region is thought to have been originally settled by Paleo-Indians during the late Pleistocene, approximately 12,000 years ago. The oldest known building remnants, however, are about 4,000 years old—built by the Hohokam, who are known to have been in the area since at least 2100 BCE. If the downtown Tucson of today had any equivalents in the intervening eons, they are lost to the ages. 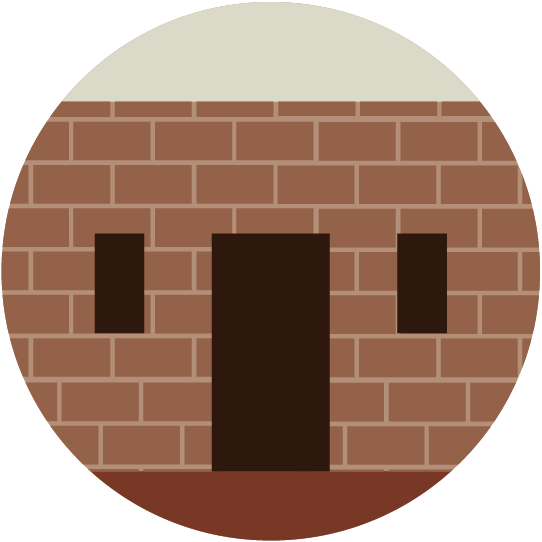 The oldest building that leaves any surviving traces in downtown Tucson today is the Presidio San Agustin del Tucsón. This was originally a military fort, constructed on the order of the Spanish officer Hugo O’Conor in 1775. The original fort was torn down after the United States purchased the land in the Gadsden Purchase of 1853, and the few remaining walls were gone by 1918. A later excavation project uncovered some surviving portions of the fort, and some of them have been partially reconstructed. You can see them today near the old Pima County Courthouse. 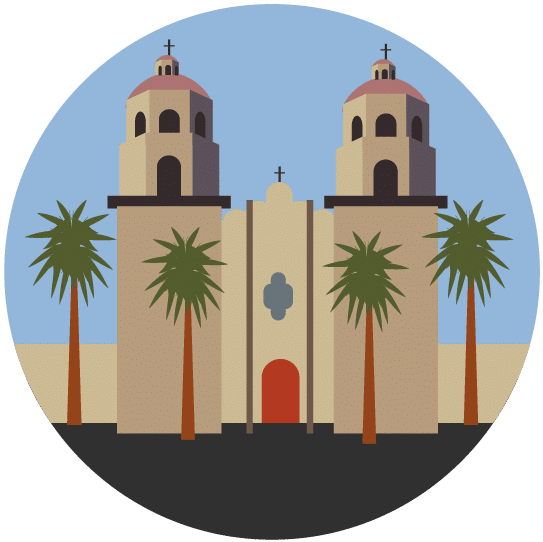 The arrival of the Southern Pacific Railroad in 1880 and the opening of the University of Arizona in 1885 marked the start of Tucson’s emergence into the modern world. But the city was still small, made up largely of adobe houses and centered largely around what we know as the downtown area. The most impressive building was the Cathedral of St. Augustine, first built in 1868 and then rebuilt in 1897. The cathedral still stands in downtown Tucson today, and it remains as striking as ever. 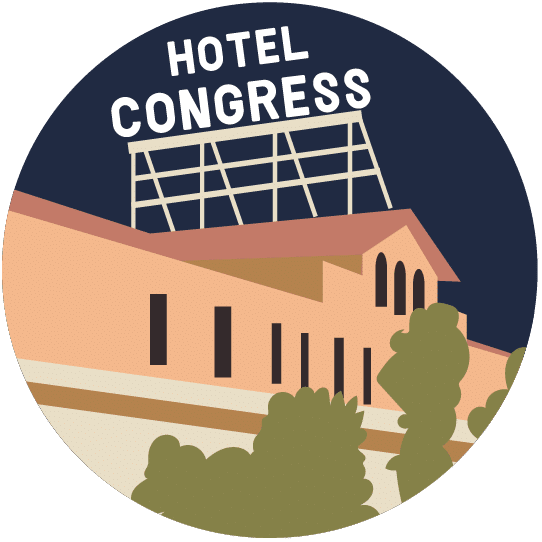 If you could jump back in time and take a stroll through the downtown Tucson of the late 1920s and early 1930s, you would see a number of familiar sights. You’d see the Rialto Theatre, which first opened its doors in 1922—but instead of the rock musicians who adorn the marquee today, you’d see silent movies advertised. You could glance across the street and see the Hotel Congress, which hosted its first customers in 1918. A few blocks away, you’d find the Fox Theatre, a vaudeville house whose opening night—on April 11, 1930—was said to be the noisiest celebration Tucson had ever seen. If you walked a few blocks north, you’d stumble upon the Reilly building with its 1920s art deco exterior—a rather cheerful look for the funeral home that originally occupied the building. Not only do all of these buildings still stand, but they are still bustling hubs of commercial activity. Even one of Tucson’s most recognizable landmarks, the dome of the old Pima County Courthouse, would be there to greet you—the original courthouse was constructed in 1929. 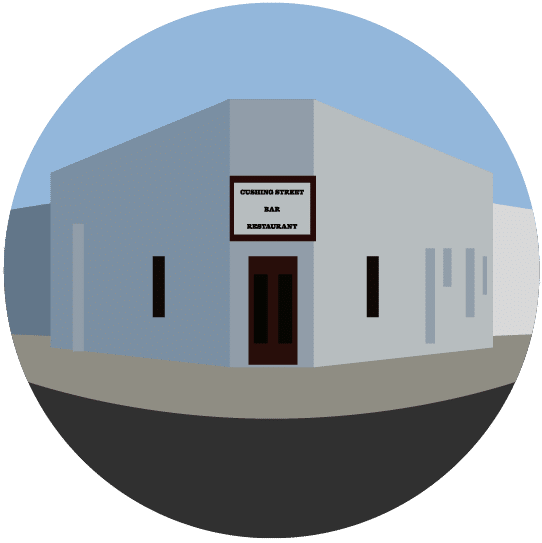 Downtown Tucson was originally the geographic center of the city. This would change after World War II, when the population exploded by more than 500 percent and dense neighborhoods sprang up to the east to provide homes for the newcomers. Perhaps this helps to explain why so much of downtown Tucson feels frozen in time; much of it was constructed before the modern, urbanized Tucson we know even existed. While most major cities’ downtown areas are fortresses of steel and glass, downtown Tucson is part-community, part-museum. 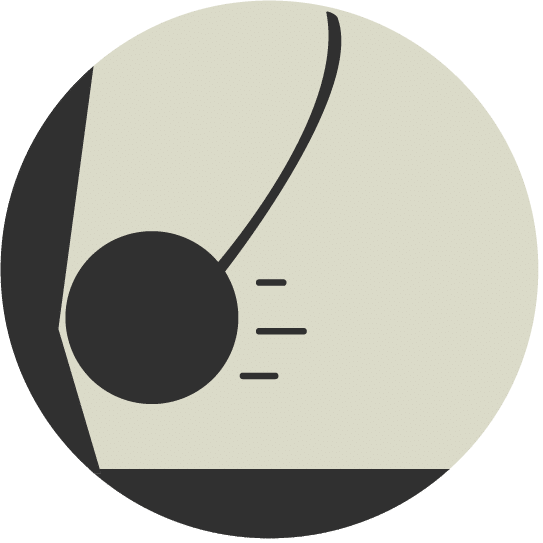 By the 1960s, Tucson had become embroiled in a debate over the future of downtown. It was argued that businesses were abandoning the area and that much of it looked run down and abandoned. A columnist for the local newspaper, the Tucson Citizen, even referred to downtown as Tucson’s own “skid row.” In 1966, the city embarked on a major redevelopment project that transformed the appearance of the entire downtown area. The project gave us the Tucson Convention Center, La Placita, and most of downtown’s city and county government buildings. However, the project also demolished much of downtown’s historic barrio neighborhoods, wiping out an irreplaceable part of Tucson’s culture. The decision remains controversial today.

Many longtime Tucson residents will remember the downtown Tucson of the late 1990s, when there was not much to see besides government buildings. The area was largely dark and deserted at night. But downtown Tucson’s unexpected renaissance lay just around the corner, spurred by a series of infrastructure projects that cleaned up older buildings and improved the streets. The much-anticipated construction of Tucson’s streetcar, which began running in July 2014, marked the turning point. More than 200 businesses have opened in downtown Tucson over the past decade, bringing a much-needed jolt of economic energy to the area. If history has anything to tell us, it’s that downtown Tucson’s story is just beginning.

Pennington Creative is proud to be a part of the downtown Tucson community. If you’re looking to revitalize your online content, we can provide you with a wide array of customized content features, from professional blogs to dazzling graphic design to authoritative onsite copy. Get in touch with us today to learn more about our services.

Set up a discovery call